Q: Can I wipe out my student loans in Oregon bankruptcy court?

A: It depends on the type of loan and your individual income and expenses.

The general rule that student loans cannot be discharged in bankruptcy is found in section 523(a)(8) of title 11 of the Bankruptcy Code, as revised in 2005. The section states that a bankruptcy discharge does not apply to any debt:

unless excepting such debt from discharge under this paragraph would impose an undue hardship on the debtor and the debtor's dependents, for--(A)(i) an educational benefit overpayment or loan made, insured, or guaranteed by a governmental unit, or made under any program funded in whole or in part by a governmental unit or nonprofit institution; or (ii) an obligation to repay funds received as an educational benefit, scholarship, or stipend; or (B) any other educational loan that is a qualified education loan, as defined in section 221(d)(1) of the Internal Revenue Code of 1986, incurred by a debtor who is an individual.

In Riso, the Ninth Circuit stated that the general rule is to be strictly construed in favor of debtors (people who file bankruptcy) and against student loan creditors.

Q: Is my debt considered a non-dischargeable "student loan"?

A: It depends who made the loan and for what purpose. 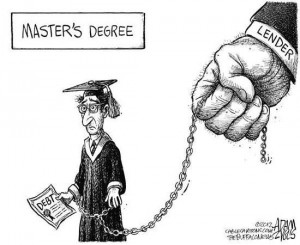 In Nunez, the Oregon bankruptcy court determined that category (B) does not include private student loans to attend schools that are not listed on the Department of Education's Federal School Codes Lists.

Q: Can I discharge my student loans under the undue hardship exception?

A: Only if you have no disposable income, no potential to increase your income in the future, and have made prior good faith efforts to repay your loans. 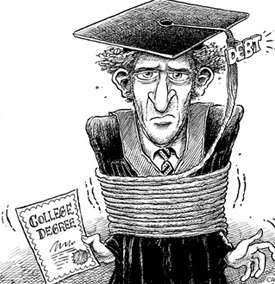 The general rule contains an exception: student loans that would impose an undue hardship on a debtor and a debtor's dependents can be discharged.

In 1983, Marie Brunner filed bankruptcy to discharge her student loans under the undue hardship exception. Based on her testimony that she couldn't find work as a social worker in New York, her bankruptcy judge granted her a hardship discharge. When the student loan company appealed to district court, Brunner couldn't afford to hire an attorney to represent herself. Brunner ultimately lost twice on appeal, resulting in a widely followed Second Circuit opinion called Brunner.

In order to qualify for the undue hardship in Oregon, you must meet each of the three Brunner test prongs by proving: (1) you cannot, based on your current income and expenses, maintain a minimal standard of living for yourself or your dependents if required to repay your student loans, (2) additional circumstances exist which make it likely that your state of affairs satisfying the first prong will persist for a significant portion of the repayment period, and (3) you have made good faith efforts to repay your student loans.

Read my next post to learn more about passing the first Brunner prong.

--
Michael Fuller is a partner at Olsen Daines in Portland, Oregon and a consumer law adjunct professor at Lewis & Clark Law School.
Posted by Unknown