I'm sad to report that not even a year into our relationship, Amex is already LYING to me.

On Friday afternoon I bought slacks at Nordstrom Rack. The teller swiped my Bluebird card but I ended up paying in-full with cash.

At 4:21 AM on Saturday morning Bluebird warned that my account was "past due." 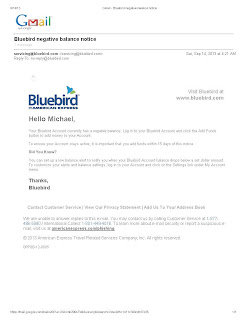 "Past Due? Impossible, it's pre-paid," I thought.

At 7:12 AM on Saturday morning I called Amex.

In a thick accent, Amex's agent told me I wouldn't have access to the funds in my account for another week.

She explained that my Bluebird member agreement allowed Amex to deny me access to my funds for 8 days because Nordstrom Rack placed a hold on the card.

"I did read my contract! I blogged about it," I said.

I held on the line while she read through various parts of the voluminous member agreement.

She was wrong. The terms she cited were not in the contract.

"You Should Have Contacted Us Yesterday"
After conceding that the 8 day term wasn't in the contract as she represented, she argued I should have contacted Amex the day prior, when the hold was made.

"How could I have known about it? That's the whole point -- it was unauthorized!" I said.

Even though I reported the unauthorized hold as soon as I found out about it (and less than 24 hours after it took place), Amex said I should have called sooner.

"You Gave the Merchant the Card"
Amex's final fall-back argument was that the hold was not unauthorized because I gave the card to Norstrom Rack.

I analogized that giving keys to a car wash attendant doesn't authorize him to take money from your glove box.

Amex's agent was unpersuaded and unsympathetic.

Final Thoughts
So there you have it. The next time someone tells you to "check your contract" -- do it. They might just be full of shit.

Not exactly the crime of the century, but high enough on my bullshit meter that I will not continue to use Bluebird.

Take care of yourself, and each other.

Disclaimer: The call with Amex lasted 40 minutes and I wrote this blog from memory shortly after the conversation occurred.
Posted by Unknown